"A snowy day on the farm didn't stop the birth of this little Scottish highland calf!"

Happy Birthday Diego! Feb 9, 2017 Diego was born in the middle of a New England ice storm. Stout and healthy, yet soaking wet, with no way to dry from Mother Nature's wrath, we drove a pick up truck out to collect the shivering calf. We quickly transferred him into the bed of our truck and then drove him in to our store. Tied with a flimsy piece a baling twine as a collar (to limit the cow patties inside), we toweled him off and dried his hair with nothing else than a hair dryer we stole from my bathroom (which has remained a highlander hair dryer and been used on several occasions since). Because of the serious cuteness of this little fuzzie bear, I shot a 21 second video and shared it to to our Facebook page for what I thought would be the enjoyment of a few of our friends. Boy, was I wrong....... What happened next could never be predicted....There were lovers, there were haters...22M views, and 157,000 comments. We were interviewed by local news and newspapers, the BBC, the Associated Press and even made into the land down under 10,500 miles from home. Our story was picked up in multiple continents, dozens of countries and thousands of publications. Some were accurate and offered friendly and accurate reporting about the unjust slander that took place.... some were not. Why? Well, I don't think anyone would argue how cute this little bugger is. He was adorable and the reason I shot the video in the first place. But, it came at a time where people were politically polarized, angry and not afraid to share their opinion or judgement of us and their perspective on our farming practices. Our Facebook page became the platform for meat lovers vs vegetarian debates... ok perhaps more like shoot outs. So many came to our defense, because so many others tried to spin this into something negative with their "perception" versus the reality of the situation. It did get brutal and though I had to keep reminding myself there is no such thing as bad press, the comments and accusations were harsh and heartless and couldn't have been further from the truth. We care about the well being of our animals and try our best to give them a happy life. We simply dried off and warmed up a wet calf and immediately returned it to his mom. Would Diego have survived if we didn't get involved? I am still unsure, but it certainly goes against our human nature to not try to help. That's what we farmers do. We respect life, and animals, and nature and the environment. We are connected and grateful. What was the meaning of his name, Diego? During the height of the media hoopla a father from Spain reached out to us and asked if we could name our calf after his six year old son. It was his birthday and he loved cows. And.... he was not remiss in mentioning that he did in fact love meat as he wanted to make sure we knew he was supportive or raising animals responsibly. And so our cute nameless, famous calf was named Diego after a young Spanish cow-loving boy. Today, Diego is a healthy and happy breeding bull. Raised on open pastures with fields of plenty. Come visit and say Happy Birthday to Diego! See the article in the news... Keira Farmer, Owner Yankee Farmer's Market & Pitcher Mountain Farm Farmer, Mother, Wife, Kinesiologist 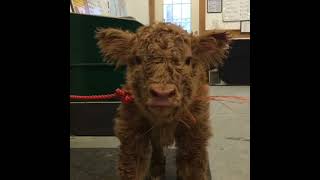 Make The Most Of Your Harvest! Making "Sun-Dried" Tomatoes

A New Look For The Buffalo Buyers Club!

Lock In Low Prices For Months With A Meat Package!

5 Recipes to Stretch Your Meat Budget

The Only Health-Focused, Organic Wine Club in the World

Head over to Dry Farm Wines for some amazing wine.